Megan is married to John and a working mom of two. When she was 37, she gave birth to her first. Below is their story.

Our story started way before our first was born. Like so many, my husband John and I experienced some difficulty, not in getting pregnant but in staying pregnant, so this was our fourth pregnancy. The other three had all ended in miscarriages and all three required D&C (dilation and curettage) procedures weeks later, so we were starting to wonder if we would ever have children. 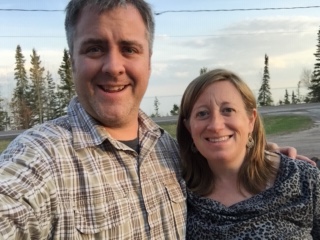 Dr. Sebastian, one of St. Luke’s OBGYN providers (since retired), finally diagnosed a uterine septum and referred us to a surgeon at the University of Minnesota who was able to remove the septum. Soon we were pregnant again, the surgery giving us some hope that this fourth pregnancy might end joyously.

At first we only told our close friends and family, but as the weeks went by we continued to get great reports from all of the ultrasounds and felt more confident sharing our news. We were elated and began preparing the nursery! Everything went fine until about 34 weeks.

A risk of stillbirth
I started having really itchy hands and feet, and mentioned it at a routine appointment with our St. Luke’s OB-GYN, Dr. VanStraaten. She recognized the symptoms and had us do a blood test to confirm it was obstetric cholestasis. Though there wasn’t much risk to me, this increased the risk of stillbirth for our baby the closer we got to 40 weeks.

Dr. VanStraaten recommended that I be induced at 37 weeks to reduce this risk. She explained that 37 weeks was the perfect time: it was early enough to reduce the risk of stillbirth, but long enough for baby’s development. Our induction date was scheduled a week out and we went home, nervous but excited.

A Cinco de Mayo baby?
On May 4 we went to St. Luke’s Birthing Center and as a Spanish teacher, I was pretty excited! I thought we were going to have a Cinco de Mayo baby and celebrate a birthday with the Battle of Pueblo! They started the process with an induction bulb when we arrived in the evening, and we stayed overnight. Then early the next day, they started me on Pitocin through an IV.

After that, it was a pretty uneventful Cinco de Mayo for us as we waited. We watched shows on our Apple TV and every half hour the staff would increase my Pitocin dose a little more. I started having contractions, but they weren’t really strong or painful. We walked, sat on the birthing ball, and used our labor tub to try to get things moving.

But after about 16 hours, I was only dilated 3 centimeters (cm).

Getting ready for delivery
Since it was getting late in the evening and I wasn’t even near delivery, the staff gave us the choice to rest that night or keep going. One thing that really stuck with us during our stay was the Birthing Center staff’s willingness to share the pros and cons of any decisions we had to make. They took the time to help us process, and clearly having more energy after a good night’s rest seemed like a good plan for us.

On May 6, we spent another day with the doses of Pitocin, waiting. Not until my doctor broke my water did things really start to move. Then the contractions got way more intense – stronger and closer together. To deal with the increasing pain, we tried to relax with music and get my mind off of it, but I don’t remember being very good at that. My husband would try to pick a song and I’d wonder how it could possibly be “motivating”! A few hours later I chose to have an epidural and it was instant relief. 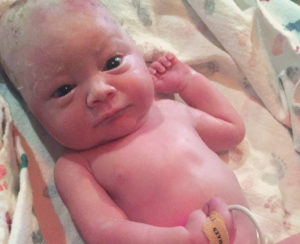 Welcome to the world, George
I pushed for about two hours. I kept asking for ice cubes. After every contraction, John would give me another ice cube and we got in a good rhythm.

I couldn’t hold him right away because he needed some oxygen, but there were many staff members making sure that both he and I were doing okay. George’s doctor, Dr. Vittorio, even drove in for his birth (that early in the morning!). Within 5 minutes, I got to hold him for the first time and it’s hard to describe how amazing those first moments were as a family of three! It felt like so many years of grief were instantly erased!​ 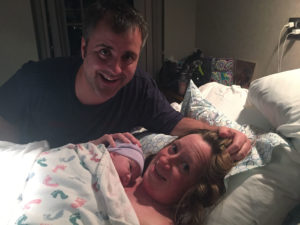 Level II Nursery. It was hard to be faced with another setback. But through it all, everyone at the Birthing Center was perfectly supportive and so, so kind to us. We didn’t feel like we were just a number and it really helped to set our minds at ease to see their caring expertise.

It took two days of extra care, but George’s blood sugar levels eventually stabilized and we could have him back in our birthing suite again. Finally, after four days of labor then four days under the watchful care of staff at the Birthing Center, we were ready to head home.

This is how Megan remembers the day George was born. To hear what he remembers, watch his story below. View More Stories » 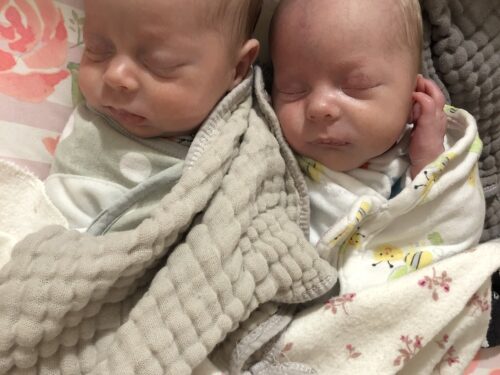 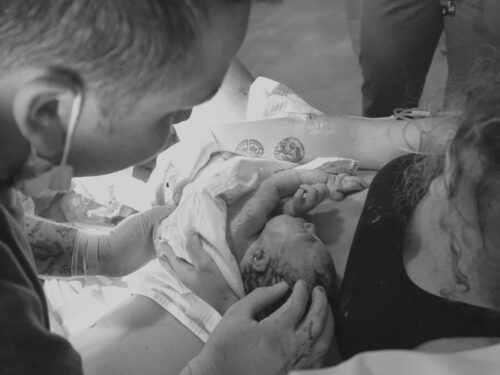 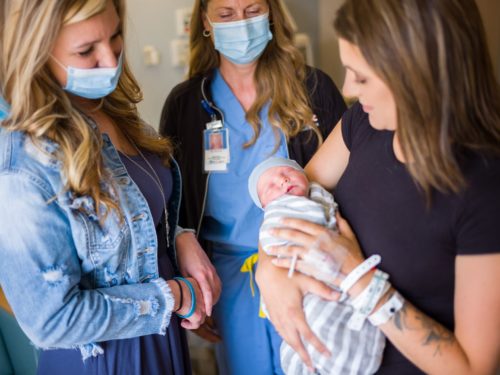